In this post I cover (briefly) connecting Discoverer Plus relational to the EUL. I used the connect directly option in the Discoverer connections page to connect to the 'AA' EUL hosted on the XE database. After Plus launched, I verified that I was indeed connected as user 'AA' against an XE database to the 'AA' EUL. The reason I verified this every time connected is because I have three databases running on my laptop: a 10.1.0.4 infrastructure database, another 10.1.0.4 database for OLAP (I don't want to use the infrastructure database for OLAP, even though it is an enterprise edition version with OLAP, Data Mining, and Partitioning options available), and now the XE database (10.2.0.1). It would do me no good if I made a mistake when entering the connection details and ended up connecting to one of the other two databases (my tnsnames.ora file has entries for all three databases). 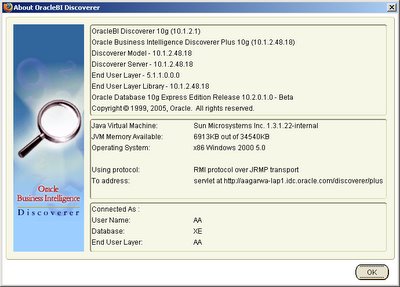 Having verified that Plus was connected to an XE database ("Oracle Database 10g Express Edition" to be propah), I now wanted to see if I could create a simple report, then proceed to create some analytic calculations, share the workbook, schedule it - basically do some basic sanity testing. Oh, and yes, open the workbook in Viewer, and go through the typical steps that a user would go through. 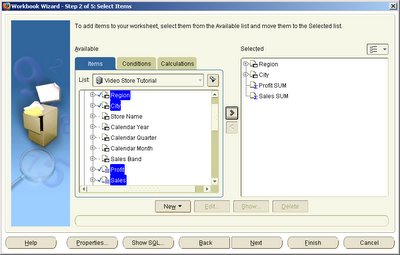 A simple tabular report with Region, City, Profit and Sales turned up nicely. A multi-pie chart added to the appeal! 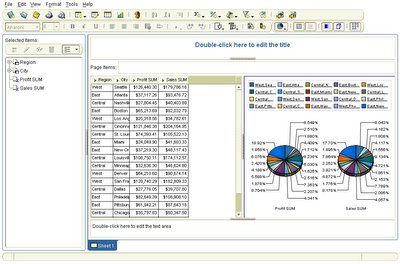 On to creating an analytic calculation. Here is the first analytic calc being created - a rank of cities by Profit. The calculation itself is:
RANK() OVER (ORDER BY Video Analysis Information.Profit SUM DESC)
Discoverer itself would not perform this calculation: it would simply include the sql in the worksheet SQL and pass it to the database. Therefore, if this worked, it would mean that XE was also able to compute SQL analytic functions. 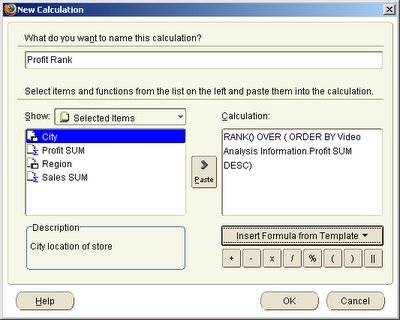 Added a second calculation for share of Sales by city for all regions, added a stoplight format each to the two analytic calculations, edited the sheet title, renamed the sheet, saved it, re-opened it, and everything worked like clockwork! 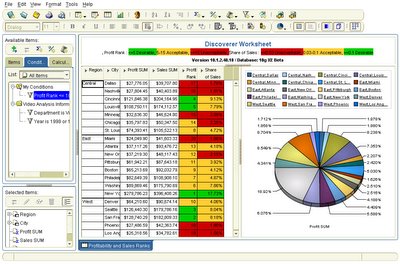 For readability, I copied this, removed a couple of items, and ran this on my XE database using SQL*Plus: