Global warming is a serious yet controversial enough topic without bringing in bad data visualizations practices into it. The Wonkblog on the Washington Post has an article titled, "You can’t deny global warming after seeing this graph". The post reproduces a chart prepared by the World Meteorological Association that plots global temperatures by decade. While the data shows that the last decade, 2001-2010, was the hottest on record, the graph uses a broken Y-axis that begins at 13.4°C instead of starting at zero. The chart does not hide this fact, and you can see that the chart's Y-axis starts at 13.4°C, but the most visually prominent piece in the graph is, well, the graph! And it screams the message that global temperatures are going off the charts - it's time to panic. There is no denying that we as a world need to get serious about investing in alternative and renewable sources of energy like solar, wind, and even nuclear, but this graph is just plain bad. 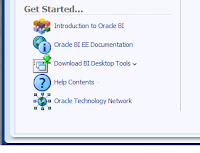 After downloading this version of Smart View, if you want this version of Smart View to be available as a link from the Home Page of Oracle BI EE (the "Download BI Desktop Tools" dropdown under the "Get Started..." section), you need to follow the instructions (also see Installing and Deinstalling Oracle Business Intelligence Client Tools)
You can find more information in the BI documentation library (Business Intelligence Documentation for Oracle Fusion Middleware 11g (11.1.1.7)) or in the Oracle Essbase Documentation Library, Release 11.1.2.2.200

A new version (11.1.1.7.0.1879) of the Oracle BI Mobile HD App was released to the Apple iTunes App Store on Wednesday. This release has several new features of note. This updated version also fixes some issues that were reported in the update that went out late last week on the 28th of June.

Last week saw the release of the OBIEE Bundle Patch 11.1.1.7.1 and on Friday bundle patch 11.1.1.6.11 for Oracle Business Intelligence Enterprise Edition became available on the Oracle My Support Portal.

The tracking ids for the respective bundle patch components are:

Happy Monday to all!
Abhinav
Bangalore