This (the photograph below) is the Discoverer pod at the left, and the Reports pod to its right. I had a laptop with 2GB RAM with all the software needed installed on it (10.1.2 infrastructure database, a 10.2 database, middle-tier, Add-Ins, and more), so that I didn't have to rely on a network connection. Network connectivity was quite good and I don't think I would have had problems with network speeds, but anyway. Each pod also had a 17" LCD monitor, so I could have the presentation/demo on two screens - the laptop and the monitor. This helped. Not everyone likes peering into a laptop screen. 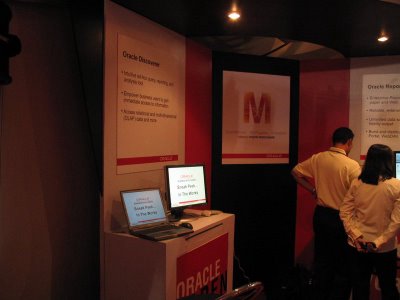 I had prepared a set of slides that ran in autoplay mode so that people walking by would get to see something interesting and hopefully stop by to see the software. The presentation itself ran for less than 4 minutes in autoplay mode and had lots of screenshots and very big font size text. In the end it turned out that I walked only a few people through the presentation. Most were interested in seeing the software as you can see below. I think the lady in the photograph below is from India's largest airline and are using Discoverer 9i. She was very interested in the new features of the 10.1.2 release (thanks to Navneet Singh, Oracle Reports PM, for snapping this photograph). 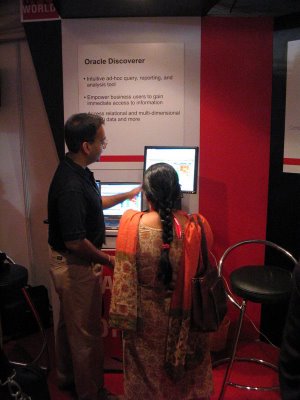 Over a period of two days at the demogrounds I spent close to 14 hours on my feet at the Discoverer pod and showed different parts of BI 10.1.2 to what seemed like a never ending stream of visitors to the Discoverer pod. I am waiting for the final scan numbers from marketing so I may be able to put a number to infinity. Most of the software I demoed was production, but two components in various stages of development that I showed to people were the update to Discoverer Plus OLAP with custom-member support, and a new work-in-progress to our BI-Office integration suite.

If I were to categorize visitors to the Discoverer booth (and this holds true for the BI spectrum as a whole I would hazard) I would put them into four groups:

I interpreted the fact that close to half the visitors were new to BI in the following way:
1. The BI market in India is small, very small in fact, but growing fast.
2. The push for BI seems to be coming predominantly from customers implementing an ERP solution and then looking for a BI tool. Oracle and PeopleSoft have a proportionally large install base in India, so this acts as a pull for BI tools. These companies have small budgets and rule out independent vendors like BO and Cognos on the price factor alone.
3. As more companies in India reach a size where they feel the need for an ERP solution and can afford one, the number of BI customers will only increase.

Questions
Some of the more interesting questions asked by visitors who saw Discoverer, its capabilities, ease-of-use, Office integration capabilities (especially the Excel export and Add-In):