Knowledge is power, or - "gyanadheenam jagat sarvam" - as the Sanskrit phrase (almost) similarly states. Whether the knowledge that 100 or 1,000 or 10,000 people visit the BI blog everyday is power that I can utilize is something debatable. Whether it is even 'power' of any kind is also a question.

Sometime back I had wondered (link to blog post) about a sudden spurt in traffic to the blog. Now, blogging (work related as well as personal) is pretty much a non-monetizable activity (my compensation, reviews, and performance objectives are in no way tied to the popularity of this blog, though some may want to try and establish a negative correlation between the two), yet I do have some amount of interest in seeing that this blog gets more visitors than less.

These then are screenshots from reports I ran using Google Analytics on the BI blog on such topics as browsers, platform, geographies, screen resolution, etc...

Unsurprisingly so, the dominant platform for visitors to this blog is Windows (96%+), followed far behind by Macintosh, Linux, and Sun OS.

When it comes to browsers, Firefox has a share (30%) disproportionate to its overall share (which hovers around the 10-12% mark). Along with Internet Explorer (64%), these two browsers pretty much are it. Opera, Safari, and others are far behind.

The situation is slightly more varied when you combine browsers with platforms; it is apparent that Windows XP is the most popular OS for visitors to the blog.
Various versions of IE & Firefox on XP made up 75% of the traffic. I was surprised to see both IE7 and Firefox 2 (neither of which were officially released till a few days back) make up more than 5% of the traffic.

No surprises here - almost every browser was Java enabled.

32 bit color is the standard - wonder if people really don't know they can switch down to 16 bit color (and thereby improve performance, if only a wee bit), or that graphics memory is now available in hundreds of megs for people to not really care (I have seen some new desktops at work with something like 200 megs of video memory!).

Everyone has Flash installed - even the latest versions: 8 and 9. 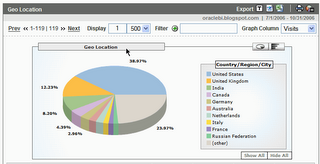 And here is the complete list of 119 countries (in alphabetical order):