Big changes ahead for India's IT majors

My article on challenges confronting the Indian IT majors was published in DNA in January 2015.

Here is the complete text of the article - Big changes ahead for India's IT majors: 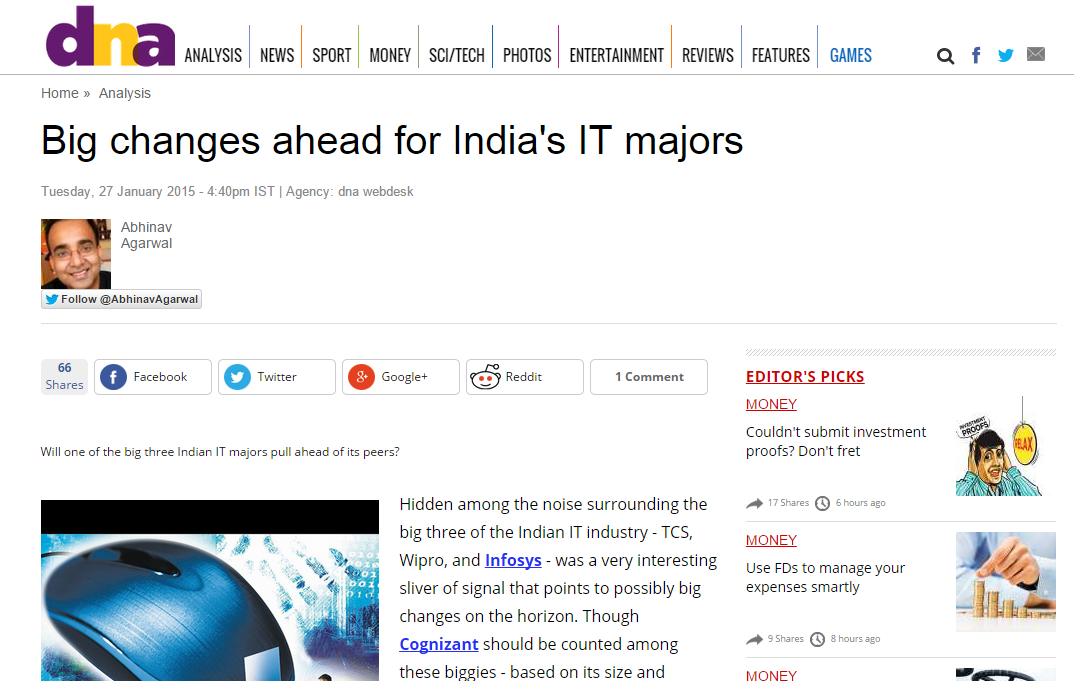 Hidden among the noise surrounding the big three of the Indian IT industry - TCS, Wipro, and Infosys - was a very interesting sliver of signal that points to possibly big changes on the horizon. Though Cognizant should be counted among these biggies - based on its size and revenues - let's focus on these three for the time being.

Statements made by the respective CEOs of Infosys and Wipro, and the actions of TCS, provide hints on how these companies plan on addressing the coming headwinds that the Indian IT industry faces. Make no mistake. These are strong headwinds that threaten to derail the mostly good fairy tale of the Indian IT industry. Whether it is the challenge of continuing to show growth on top of a large base - each of these companies is close to or has exceeded ten billion dollars in annual revenues; protecting margins when everyone seems to be in a race to the bottom; operating overseas in the face of unremitting resistance to outsourcing; or finding ways to do business in light of the multiple disruptions thrust by cloud computing, big data, and the Internet of Things, they cannot continue in a business-as-usual model any longer.

For nearly two decades the Indian IT industry has grown at a furious pace, but also grown fat in the process, on a staple diet of low-cost business that relied on the undeniable advantage of labour-cost arbitrage. Plainly speaking, people cost a lot overseas, but they cost a lot less in India. The favourable dollar exchange-rate ensured that four, five (or even ten engineers at one point in time) could be hired in India for the cost of one software engineer in the United States. There was no meaningful incentive to either optimize on staffing, or build value-added skills when people could be retained by offering fifteen per cent salary hikes, every year. Those days are fast fading, and while the Indian IT workforce's average age has continued to inch up, the sophistication of the work performed has not kept pace, resulting in companies paying their employees more and more every year for work that is much the same.

TCS, willy nilly, has brought to the front a stark truth facing much of the Indian IT industry - how to cut costs in the face of a downward pressure on most of the work it performs, which has for the most part remained routine and undifferentiated. Based on a remark made by its HR head on "layoffs" and "restructuring" that would take place over the course of 2015, the story snowballed into a raging controversy. It was alleged that TCS was planning on retrenching tens of thousands of employees - mostly senior employees who cost more than college graduates with only a few years of experience. Cursory and level-headed thinking would have revealed that prima-facie any such large layoffs could not be true. But such is the way with rumours - they have long legs. What however remains unchanged is the fact that without more value-based business, an "experienced" workforce is a drag on margins. It's a liability, not an asset. Ignore, for a minute, the absolute worst way in which TCS handled the public relations fiasco arising out of its layoff rumours - something even its CEO, N Chandraskaran, acknowledged. Whether one likes it or not, so-called senior resources at companies that cannot lay claim to skills that are in demand will find themselves under the dark cloud of layoffs. If you prefer, call them "involuntary attrition", "labour cost rationalization", or anything else. The immediate reward of a lowered loaded cost number will override any longer-term damage such a step may involve. If it is a driver for TCS, it will be a driver for Wipro and Infosys.

Infosys, predictably, and as I had written some six months back, is trying to use the innovation route to find its way to both sustained growth and higher margins. Its CEO, Vishal Sikka, certainly has the pedigree to make innovation succeed. His words have unambiguously underlined his intention to pursue, acquire, or fund innovation. Unsurprisingly, there are several challenges to this approach. First, outsourced innovation is open to market risks. If you invest early enough, you will get in at lower valuations, but you will also have to cast a wider net, which requires more time and focus. Invest later, and you pay through your nose by way of sky-high valuations. Second, external innovation breeds resentment internally. It sends the message that the company does not consider its own employees "good enough" to innovate. To counter this perception, Vishal has exhorted Infosys employees "to innovate proactively on every single thing they are working on." This is a smart strategy. It is low cost, low risk, and a big morale booster. However, it also distracts. Employees can easily get distracted by the "cool" factor of doing what they believe is innovative thinking. "20%" may well be a myth in any case. How does a company put a process in place that can evaluate, nurture, and manage innovative ideas coming out of tens of thousands of employees? Clearly, there are issues to be balanced. The key to success, like in most other things, will lie in execution - as Ram Charan has laid out in his excellent book, unsurprisingly titled "Execution".

Lastly, there is Wipro. In an interview, Wipro's CEO, TK Kurien, announced that Wipro would use "subcontracting to drive growth". This seems to have gone largely unnoticed, in the industry. Wipro seems to have realized, on the basis of this statement at least, that it cannot continue to keep sliding down the slipper slope of low-cost undifferentiated work. If the BJP government's vision of developing a hundred cities in India into so-called "Smart Cities", one could well see small software consulting and services firm sprout up all over India, in Tier 2 and even Tier 3 cities. These firms will benefit from the e-infrastructure available as a result of the Smart Cities initiative on the one hand, and find a ready market for their services that requires a low cost model to begin with on the other. This will leave Wipro free to subcontract low-value, undifferentiated work, to smaller companies in smaller cities. A truly virtuous circle. In theory at least. However, even here it would be useful for Wipro to remember the Dell and Asus story. Dell was at one point among the most innovative of computer manufacturers. It kept on giving away more and more of its computer manufacturing business - from motherboard designing, laptop assembly, and so on - to Asus, because it helped Dell keep its margins high while allowing it to focus on what it deemed its core competencies. Soon enough, Asus had learned everything about the computer business, and it launched its own computer brand. The road to commoditization hell is paved with the best intentions of cost-cutting.

While it may appear that these three IT behemoths are pursuing three mutually exclusive strategies, it would be naïve to judge these three strategies as an either-or play. Wach will likely, and hopefully, pursue a mix of these strategies, focusing more on what they decide fits their company best, and resist the temptation to follow each other in a monkey-see-monkey-do race. Will one of the big three Indian IT majors pull ahead of its peers and compete with the IBM, Accenture, and other majors globally? Watch this space.
Tags: Article, DNA
Newer Post Older Post Home