The fourth part of my series on Flipkart and its apparent loss of Focus and its battle with Amazon appeared in DNA on April 20th, 2015. 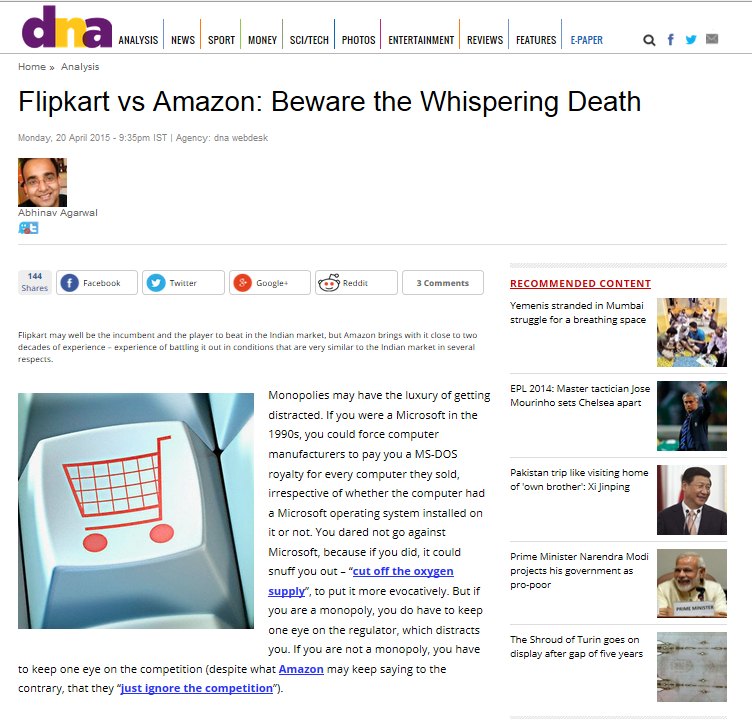 Part 4 – Beware the Whispering Death
Monopolies may have the luxury of getting distracted. If you were a Microsoft in the 1990s, you could force computer manufacturers to pay you a MS-DOS royalty for every computer they sold, irrespective of whether the computer had a Microsoft operating system installed on it or not[1]. You dared not go against Microsoft, because if you did, it could snuff you out – “cut off the oxygen supply[2]”, to put it more evocatively. But if you are a monopoly, you do have to keep one eye on the regulator[3], which distracts you. If you are not a monopoly, you have to keep one eye on the competition (despite what Amazon may keep saying to the contrary, that they “just ignore the competition”[4]).

Few companies exist in a competitive vacuum. In Flipkart’s case, the competition is Amazon – make no mistake about it. Yes, there is SnapDeal, eBay India, and even HomeShop18; but the numbers speak for themselves. Flipkart has pulled ahead of the pack. As long as Amazon had not entered the Indian market, Flipkart’s rise was more or less certain, thanks to its sharp focus on expanding its offerings, honing its supply-chain, and successfully raising enough capital to not have to worry about its bottom-line while it furiously expanded. Amazon India made a quiet entry on the fifth of June 2013[5], with two categories – books, Movies & TV shows, but followed up with a very splashy blitz two months later in August (it offered 66% discounts on many books[6] to mark India’s 66 years of Indian independence – I should know, I binge-bought about twenty books!). A little more than a year later, in September 2014, Amazon turned the screws even more when its iconic founder-CEO, Jeff Bezos, visited India. In a very showy display that earned it a ton of free advertising, Bezos wore a sherwani and got himself photographed swinging from an Indian truck[7], met Narendra Modi, the Indian Prime Minister[8], and reiterated Amazon’s commitment and confidence in the Indian market[9] - all this without ever taking Flipkart’s name. It didn’t help Flipkart that on July 30th 2014, Amazon India had announced an additional $2 billion investment in India[10]. It didn’t hurt Amazon either that it timed the press release exactly one day after Flipkart closed $1 billion in funding[11] - this was entirely in Amazon’s way of jiu jitsu-ing its competitors (so much for “ignoring the competition”). Flipkart on its part ran into yet more needless problems with its much-touted “Big Billion” sale that was mercilessly ambushed by competitors[12], and which resulted in its founders having to tender an apology[13] for several glitches its customers faced during the sale. Then there were questions on just how much money it actually made from the event, which I analyzed[14].

Flipkart seemed to be getting distracted.

When facing a charged-up Michael Holding, you cannot afford to let your guard down, even if you are batting on 91. Ask the legendary Sunil Gavaskar[15]. Amazon is the Michael Holding of competitors. Ask Marc Lore, the founder of Jet, “which is planning to launch a sort of online Costco later this spring with 10 million discounted products”[16]. Marc who? He is the co-founder of Quidsi. Quidsi who? Quidsi is (was) the company behind the website Diapers.com, and which was acquired by Amazon. Therein lies a tale.

Diapers.com was the website of Quidsi, a New Jersey start-up founded in 2005 by Marc Lore and Vinit Bharara to solve a very real problem: children running through diapers at a crazy pace, and “dragging screaming children to the store is a well-known parental hassle.” What made selling diapers online unviable for retailers was the cost involved in “shipping big, bulky, low-margin products like jumbo packs of Huggies Snug and Dry to people’s front doors.” Diapers.com solved the problem by using “software to match every order with the smallest possible shipping box, minimizing excess weight and thus reducing the per-order shipping cost.” Within a few years, it grew from zero to over $300 million in annual sales. It was only when VC firms, including Accel Partners, pumped in $50 million that Amazon and Jeff Bezos started to pay attention. Sometime in 2009, Amazon started to drop prices on diapers and other baby products by up to 30 percent. Quidsi (the company behind Diapers.com) lowered prices – as an experiment – only to watch Amazon’s website change prices accordingly. Quidsi fared well under Amazon’s assault, “at least at first.” However, growth slowed. “Investors were reluctant to furnish Quidsi with additional capital, and the company was not yet mature enough for an IPO.” Quidsi and WalMart vice chairman (and head of WalMart.com) Eduardo Castro-Wright spoke, but Quidsi’s asking price of $900 million more than what WalMart was willing to pay. Even as Lore and Bharara travelled to Seattle to meet with Amazon for a possible deal, Amazon launched Amazon Mom – literally while the two were in the air and therefore unreachable by a frantic Quidsi staff! “Quidsi executives took what they knew about shipping rates, factored in Procter and Gamble’s wholesale prices, and calculated that Amazon was on track to lose $100 million over three months in the diapers category alone.” Amazon offered $580 million. WalMart upped its offer to $600 million – this offer was revealed to Amazon, because of the conditions in the preliminary term sheet that required Quidsi “to turn over information about any subsequent offers.” When Amazon executives learned of this offer, “they ratcheted up the pressure even further, threatening the Quidsi founders that “sensei,” being such a furious competitor, would drive diaper prices to zero if they went with Walmart.” Quidsi folded, sold to Amazon, and the deal was announced on November 8, 2010[17]. Marc Lore continued with Amazon for two years after that – most likely the result of a typical retention and no-compete clause in such acquisitions.

The tale of Quidsi is one cautionary tale for any company going head-to-head with Amazon. For more details on the fascinating history of Amazon, I would recommend Brad Stone’s book, “The Everything Store: Jeff Bezos and the Age of Amazon”[18] – from which I have adapted the example of Diapers.com above. You can read another report here[19]. I suspect you may well find some copies of the book lying around in Flipkart’s Bengaluru offices!

In their evolution and growth as an online retailer, Flipkart has adopted and emulated several of Amazon’s successful features. Arguably the most successful innovation from Amazon has been to reduce, or entirely eliminate in some cases, the friction of ordering goods from their website. The pace and extent of innovation is quite breath-taking. A brief overview will help illustrate the point.
Amazon used to charge for every order placed in addition to a handling charge per item (typically 99 cents). In 2002, it launched “Free Super Saver Shipping on qualifying orders over $49” as a test. After seeing the results, it lowered this threshold to $25[20]. For over ten years that price held, till 2013, when it raised this minimum to $35[21]. Not content with this, to lure in that segment of customers who wanted to order even a single item, and have it delivered in two days or less, Amazon launched a new express shipping option – Amazon Prime – where “for a flat membership fee of $79 per year, members get unlimited, express two-day shipping for free, with no minimum purchase requirement.”[22] This proved to be a blockbuster hit for Amazon, and the company piled on goodies to this program – Amazon Instant Video, an “instant streaming of selected movies and TV shows” at no additional cost[23]. That same year it launched “Library Lending for Kindle Books”, which allowed customers to “to borrow Kindle books from over 11,000 local libraries to read on Kindle and free Kindle reading apps”[24], with no due date, and added that to the Prime program, at no extra cost. In 2011 it launched “Subscribe & Save” – that let customers order certain items on a regular basis at a discounted price – basically you had to select the frequency, and the item would be delivered every month/quarter without your having to re-order it. Amazon launched “Kindle Matchbook”, where, “For thousands of qualifying books, your past, present, and future print-edition purchases now allow you to buy the Kindle edition for $2.99 or less.[25]” Similarly, its “AutoRip” program allowed customers to receive free MP3 format versions of CDs they had purchased from Amazon (since 1998)[26], and which was extended to Vinyl Records[27].

If all this was not enough, in 2015 Amazon launched a physical button called Dash Button – on April 1st, no less – that would let customers order an item of their selection with one press of the button. It could be their favourite detergent, dog food, paper towels, diapers – an expanding selection. You could stick that button anywhere – your refrigerator, car dashboard, anywhere. It was indeed so outlandish that many thought it was an April Fool’s gimmick[28].
Amazon has been relentless in eliminating friction between the customer and the buying process on Amazon on the one hand, and on squeezing out its competitors with a relentless, ruthless pressure on the other. It manages to do all this while topping customer satisfaction surveys[29], year after year[30].

Flipkart has certainly not been caught flat-footed. It’s been busy introducing several similar programs. It began with free shipping, then raised the minimum to ?100, then ?200, and eventually ?500. Somewhere in between, it modified that to exclude books fulfilled by WS Retail (which was co-founded by Flipkart founders and which accounts for more than three-fourths of all products sold on Flipkart[31]) from that minimum. In May 2014, it launched Flipkart First, an Amazon Prime-like membership program that entitled customers to free “in-a-day” shipping for an annual fees of ?500[32]. It also tied up with Mumbai’s famed “dabbawalas” to solve the last-mile connectivity problem for deliveries[33].

Flipkart’s foray into digital music however was less than successful. It shuttered its online music store, Flyte, in June 2013, a little over a year after launching it[34]. Some speculated it was unable to compete with free offerings like Saavn, Gaana, etc… and was unable to meet the annual minimum guarantees it had signed up with music labels for[35]. Whether it really needed to pull the plug so soon is debatable – for all purposes it may have signalled weakness to the world. Competitors watch these developments very, very closely. Its e-book business has been around for a little over two years, but is not clear how much traction they have in the market. With the launch of Amazon Kindle in India, Flipkart will see it being squeezed even more. The history of the ebook market is not a happy tale – if you are not Amazon or the customer.

The market for instant-gratification refuses to stand still. Amazon upped the ante by launching Amazon Prime Now in December 2014. Prime program customers were guaranteed one-hour delivery on tens of thousands of items for $7.99 (two-hour delivery was free)[36]. This program was launched in Manhattan, and rapidly expanded to half a dozen cities in the US by April 2015[37]. Closer to home, in India, it launched KiranaNow in March 2015, in Bangalore, promising delivery of groceries and related items in four hours[38].

More than anything else, the online retail world is a race to eliminate friction from the buying process, to accelerate and enable buying decisions – as frequently as possible, and to provide instant gratification through instant delivery (in the case of e-books or streaming music or video) or one-hour deliveries. Flipkart may well be the incumbent and the player to beat in the Indian market, but Amazon brings with it close to two decades of experience – experience of battling it out in conditions that are very similar to the Indian market in several respects. More ominously, for Flipkart, Amazon has won many more battles than it has lost. Distraction can prove to be a fatal attraction and affliction.

[38] "Now Amazon will deliver from your local kirana store", http://www.dnaindia.com/money/report-now-amazon-will-deliver-from-your-local-kirana-store-2076280