Flipkart and Focus - 2 - Mobile Advertising Numbers Can Be Misleading

The second part of my series of articles on why I believed Flipkart was at losing focus, at the wrong time, when faced with its most serious competition to date. This one focused on why a fascination with mobile advertising numbers could be very misleading.
It was published in DNA on April 14, 2015. 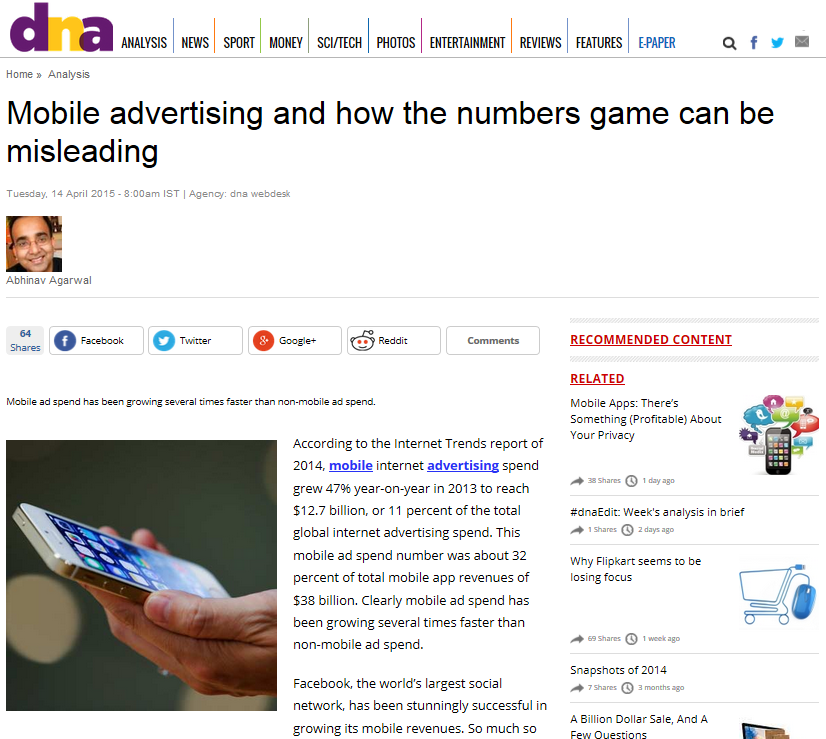 The Numbers Game Can be Very Misleading
According to the Internet Trends report of 2014, mobile internet advertising spend grew 47% year-on-year in 2013 to reach $12.7 billion, or 11% of the total global internet advertising spend. This mobile ad spend number was about 32 per cent of total mobile app revenues of $38 billion. Clearly mobile ad spend has been growing several times faster than non-mobile ad spend.
Facebook, the world’s largest social network, has been stunningly successful in growing its mobile revenues. So much so that “In the final three months of 2014, Facebook served 65% fewer ads than a year earlier, but the average cost of those ads to advertisers was 335% higher.[i]” As much as $2.5 billion in Facebook’s annual revenues came from these mobile ads – shown on smartphones or tablets. So successful has Facebook been in making money from selling these mobile ads that it “launched its in-app mobile ad network” in 2014[ii] to sell ads within other apps,


Meanwhile, Google has not been standing still. It is by far the largest player on the internet when it comes to online ads with estimated annual mobile ad revenues of $8 billion in 2013[iii], but its presence on the mobile platform has seen some hiccups. Its overall slice of the mobile ad pie has been shrinking, thanks to Facebook’s steroidal growth in the segment, but as an overall number Google’s mobile ad revenues continue to grow. It was estimated that Google and Facebook held a combined 50 per cent share of the global mobile ad revenue market in 2014[iv]. It is however a given that not only will it continue to persevere in that segment, but will sooner or later figure out the right approach to get growth back on track – given that less and less users were spending time on mobile browsers than on apps. For example, Google added deep-links[v] to its mobile search results[vi], so that users could click to be taken directly to a specific page (or its equivalent) in an app if they had that app installed[vii]. It also announced that it would start using “mobile-friendliness as a ranking signal” in its mobile search results[viii]. In yet another effort to boost ads on its app store, Google Play, it announced a pilot program to help app developers build targeted ads for search results on Google Play[ix]. It is expected that these will yields results in the coming quarters. Nor is it the case that everything is negative for Google on the mobile front. YouTube, for example, continued to be a star performer for Google. Google CFO stated that “YouTube’s mobile revenue (in 2014) increased more than 100 percent over[x]”

Let’s not forget Twitter. “Mobile advertising revenue was 85% of total advertising revenue[xi]”, or $272 million, in in its third quarter of 2014.
In a somewhat incongruous presence, we also have Indian startup InMobi, with estimated annual revenues of $372 million, and which is also estimated to be the “biggest non-public mobile ad business on the planet.[xii]” Yes, that is very, very impressive and creditable. There are several other start-ups in this space; for example, Kenshoo, whose “CEO Izhar-Prato Says $15 Billion In Annual, Online Sales Revenue Flowing Through Platform[xiii]."

So, the decision to enter the mobile ad business should seem like a non-brainer, right? After all, didn’t Google CEO Eric Schmidt say that Amazon was Google’s biggest competitor in search[xiv]? Also, didn’t Amazon have search ambitions, seeking to start first with replacing Google ads that are served on Amazon’s pages[xv]?

Not quite, one hopes.

Before you gush over the fact that 98% of Facebook’s revenue growth in its latest quarter were accounted for by mobile ads[xvi], also note that Facebook has 745 million users on an average day (that is more than 22 billion visits a month) visiting its site via mobile devices[xvii]. By the by, Facebook crossed one trillion page views in 2011[xviii], so the company does not quite have a burning problem of engagement either on its hands.

Twitter’s numbers were achieved on the back of 181 billion (yes, that is 181 followed by nine zeros) timeline views by its 284 million monthly active users, of which 227 million were mobile users[xix].
Flipkart, by contrast, had “8 million daily visits” to its web sites – I assume desktop, mobile, and app combined – as of December 2014[xx].

Amazon, despite not being known as a search player, is still estimated to have sold $1 billion in search ads in 2014[xxi].

Much has been said and written about Google’s search business; so I will add just one more point here – Google AdWords has more than one million advertisers[xxii].

And if you are a start-up hoping to make it big by either acquiring or getting acquired, do take a minute to ponder on the sobering reality-check in the form of Velti’s meltdown[xxiii].

This is not to pour cold water over Flipkart’s acquisition of Bangalore-based AdIquity[xxiv] (which had raised $15 million from VC firms and was at one point known as Guruji[xxv]), or on Sachin Bansal’s statement, “"I believe it (mobile advertising) can be a big business for us[xxvi]". Far from it. Every company should look aggressively for avenues to disrupt existing business models as well as leverage strengths in one area to prise open a market in another area. That is what every leader aspires to do.

But, if you believe, as a start-up locked in a duel with a company like Amazon that has planted its feet in the Indian market and which is comfortable with having earned less profits in its entire existence than Apple in one quarter[xxvii],[xxviii], with no profits on the horizon (I touched on this in the previous post), VCs that would be getting increasingly worried about their exit strategy (and hopefully profitable exit strategy at that), you have the luxury of entering a market such as mobile ads – on a global level – and where the competition consists of companies like Google, Facebook, and Twitter, then do not be surprised if you are accused of having lost focus.

In the next part I will take a look at why Flipkart may still believe that its app-only drive and mobile ad ambitions could provide synergies.